skip to main | skip to sidebar


We were sitting in the coffee shop at an airport (on our way back from vacationing in Cincinnati) and heard some guy mention "General Hospital", and the women he was chatting with replied that she didn't watch it. That was all I heard about their conversation. I wonder if he's going to the GH Weekend, since this flight is headed to L.A.? Seems unlikely, but who knows? I wish we were going there, but alas, we're just changing planes..

On our flight, I watched the first two episodes of the show "Partners" on FX starring Kelsey Grammer and Martin Lawrence. It wasn't that funny at first but got slightly better. I started to watch the "Cedar Cove" DVD, but then my battery ran out. 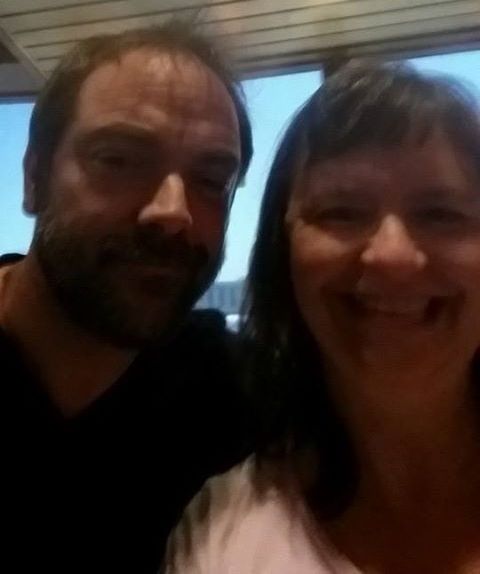 We had a stopover at the L.A. airport, where I saw one of my very favorite actors, Mark Sheppard. He's been in lots of my favorite scifi shows like "Medium", "Battlestar Galactica", "Doctor Who", "Leverage", "Warehouse 13", and of course, "Supernatural", where he still plays Crowley, King of Hell.  He usually plays a bad guy, but he's great at it. He's got a wonderful velvety voice and British accent as well as just being a fantastic actor.  I was just beside myself in geekiness seeing him. I went over and told him how much I like his work and asked if he minded taking a photo, so he was very nice and gracious about it.  I was so ecstatic!! How often does that happen? Almost never. I should have given him my card or asked for his autograph, but I was just too giddy.

When I got home, I watched "Longmire", "Major Crimes", and "Hot in Cleveland" from this past week. I still have a lot to catch up on. "Longmire" is fantastic - always!!!  I really enjoyed the "Major Crimes" episode with Luke Perry. It was hilarious and also touching at the end.

I don't know why they thought doing an animated episode would be good for "Hot in Cleveland". The many great guest stars are enough gimmicks for one show. This was just too weird and not all that great. Not very funny at all. It was like one of those bad old cartoons like "The New Adventures of Gilligan" or something.


I'm very annoyed at my cable company, Oceanic Time Warner Cable. We're moving in about a week, and they said I can't get my cable/internet/phone turned on in the new place until 8/21.  We're moving in the same exact building, only 9 floors down!!  That's just ridiculous. I guess I'll have to catch up on some of my shows On Demand after I finally get the cable back. That really sucks.  Good thing I have lots of DVD's to watch!  But it really messes up the site's transcripts. We're still missing some from last Summer when I moved.

A friend of mine runs another TV site and he was very upset last night that someone he hired to write for his site had just copied stuff from another site! Unfortunately, he's not alone. This has happened quite a few times to me as well in the 20 years since I've been running this site. I don't know why anyone would do this; it's unfathomable. Extreme laziness and/or stupidity? Who knows. It definitely takes someone who has no morals.  It hurts the site you steal from as well as the site you lie to.  I'm very glad I was able to help my friend and make him feel better about it. He was very upset. Those of us who run these type of sites do it because we love TV and we want to share that love with others in the world.  We're not rich and this is not our main income....
First, the good news, Oceanic Time Warner Cable read on my Facebook page that I was annoyed, so they told me right away that they could fix it, and someone phoned me to assure me that I should be able to get internet and cable right away when I move into my new place. I didn't even have to call them - it was working already when I hooked it all up! It just takes a few days for the phone to start working. Isn't it great when a company exceeds your expectations?  Love it!

Also, the hurricane turned out to be nothing.  It mostly hit the island of Hawaii, what they call The Big Island. We're on Oahu. We just had lots of wind and rain.  We have a lot of that, anyway.

So as soon as we moved into our new place, the first thing I did was hook up the TV, DVR, DVD recorders et al. and it worked great. Yay!  Unfortunately (this is the bad news), I had trouble hooking up the computer that I use for making the transcripts. The plug that goes into the computer from the TV is not working. I think some of the pins may be bent, but I'm not sure. I hope the computer repair place can help me. I phoned them today, but they're probably closed due to the storms.  I can't run any more transcripts until that's fixed. Hopefully next week!

Otherwise, just been watching a little bit of TV... my regular summer shows that I always talk about. The "Longmire" finale was awesome! But sorry to see Branch go.

"Major Crimes" had another excellent episode and the ending of this week's episode was spectacular! I hope Fritz will be okay. They'd better not kill him off!

I've also been catching up on "General Hospital" still, here and there... you really have to be a devout soap opera fan now to be watching this crap. Sorry, but the writing on these shows is just awful. They think we're all idiots, apparently, and just like lots of violence and crime, and heroes with no brains.  I love the actors and have been watching since 1984 - that's really the only reason I still watch.  On GH, they make interesting characters but then write terrible stories for them. Have you ever noticed that when it comes to humor, it's mostly the bad guys that have it. There are some exceptions, like Felix, Lucy, Alexis and Luke... but mostly it's people like Obrecht, Franco, and Britt.  In real life, a lot of the actors are really funny.  Take Steve Burton. For years he was a humorless thug on GH, and now he's a humorless ex-vet on Y&R. This guy is so funny and full of energy in real life! You sure wouldn't know it by the way they write for him.

This week's "Entertainment Weekly" has a cover story on "Doctor Who". I'm so looking forward to its return!

Monday's Colbert Report (August 6) was so hilarious!! They should get an Emmy for that one.

I watched the last two episodes of "Crossbones" last night. It was so good. I'm very bummed that they canceled it. Not sure what they could have done for a 2nd season, but they definitely left it open at the end, so they could... they didn't kill off any major characters. I think my only complaint is that, given the time period, people seem to survive some pretty dangerous wounds from knives, guns etc. It veered dangerously into General-Hospital-like unbelievability in that regard.

We have a fairly active Facebook group Talkin' TV so please join us if you can! Lots of posting news and chatter. Sometimes it's hard to run because some people like to post spoilers, but I delete them if I see them and keep reminding people not to post spoilers and not to post too much news at once. They're a good group, though.

This is a cute commercial that the guys from "Dukes of Hazzard" star in... not my favorite show, but I always love John Stewart (especially when he was on "Smallville", but sometimes I like seeing the old Dukes shows because he was just so drop dead gorgeous).  Tom Wopat was on "All My Children" for a time!

Have a great week...

Posted by Suzanne Lanoue at 8:58 PM No comments: